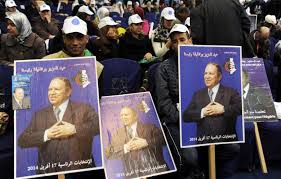 Algerian president is believed to recover from stroke and has decided to loosen restrictions on foreign policies if re-elected. The investment and industry minister, Amara Benyounes, who also serves as campaign spokesman held a campaign in Paris stressing that Bouteflika is mentally fit and remains to be the ideal person to rule the country. He added that Algeria has large space for development and that will ease the social living condition of its citizens. He encouraged the Algerians to support the stability in the country for its continuous development under the leadership of President Bouteflika who was elected in 1999 and still in power.
Benyounes called on Algerians to cast their votes regardless of the party they support because only more than a participation of 50% will represent a credible election. Six opposition parties have registered for the elections while others decided to boycott it.
Algeria needs an economic stimulus plan to handle the social and economic crisis especially in youth unemployment, subsidies and energy output. Most of Algeria’s revenues are derived from gas exportation. It also has enough reserves in shale gas that has already caught the attention of American and French firms. The government has invested around $10 million to support partnerships with foreign firms.
As Algeria continues to provide the smooth environment for investor it has gain the trust of Renault, Sanofi among other companies. Minister Benyounes continued by adding that several measures are in place to bring fresh air to the investors and reduce bureaucracy  as several public and private firms were encouraged to lead the investment channel.
He concluded by saying they need foreign partners to learn from their technical experience that they have accumulated.