Despite the ongoing differences between Egypt and Ethiopia over the construction of the Grand Renaissance Dam on the Blue Nile, a main tributary on the River Nile, Foreign Minister Sameh Shoukry has stressed that their bilateral relations will not be hampered by the matter. The River Nile serves as a source of living for most of the Egyptians living on its banks and they fear that a dam upstream will affect their usual supply. “The Nile that brings us together should be a source of joint interest rather than dispute,” Shoukry said. 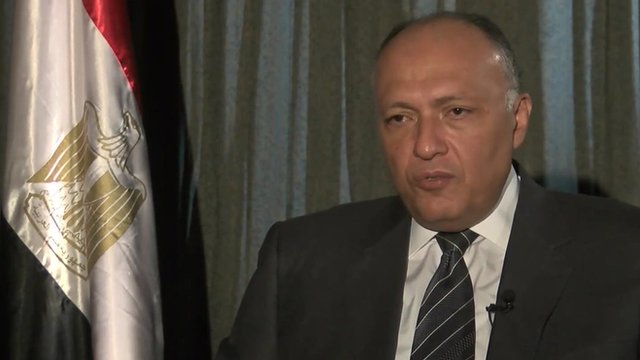 Although Ethiopia has given assurances that Egypt’s share of the Nile will not be negatively affected, Egyptians are still against the hydroelectric Grand Renaissance Dam project estimated at $4,2billion. Minister Shoukry during a meeting with a group of honors students who have just graduated from secondary school highlighted that the relations between the countries are very important and “cannot only be reduced to the dam issue.” He thinks they should work on “building trust” with them.

His comments will come as a relief to the pressure that has been showering on Addis Ababa from Cairo. Shoukry acknowledged that their ties have taken new directions after the meeting between the two head of states in June at the African Union summit held in Malabo, Guinea Equatorial, which was followed by a joint statement reiterating their commitment and dedication to mutual respect and cooperation in addition to vowing to respect international law and achieve joint gains.

The Egyptian Foreign Minister also admitted that the political crisis that the country went through has affected its role in Africa. Political instability and civil disobedience for the past couple of years forced the country’s authorities to be absent from the international political scene.