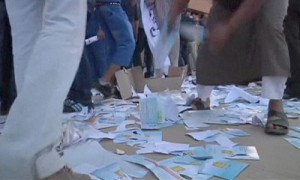 Protesters in Benghazi have attacked the High National Election Commission (HNEC) in there with the parliamentary elections to be held in a weeks’ time. The protesters demanded for a greater autonomy of Libya’s eastern region and a larger share of seats in the parliament.
They want a semi-autonomous region with first calls surfacing in March. This demand has been going on for a while and even some politicians from the east have openly shown their support for it.
Secondly, they are asking for more seats to be allocated to the east despite the use of demographical repartition. The east has 60 seats, 100 seats are attributed to the west and the south accounts for the rest. The east fears that its inferiority to the west will be felt when it comes to defending its interest and the drafting of the new constitution.
They are not interested in such elections and have burnt all the materials for the elections at the HNEC office in protest.
According to the NTC, the constitution’s drafting commission will be set up on equal grounds of 20 representatives from each region before presenting it at a simple majority referendum as written in article 30 of the 3 August 2011 Constitutional Declaration.
Fadallah Haroun, commander of a former rebel group, said “we want justice,” as one of the movement’s leaders, Abdeljawad al-Badin, described the violence as the protesters’ “reaction to the authorities disregard for their demands”. However, boycott proposals have been gaining momentum in the region as the HNEC in other towns were also attacked.
Libya is to release the four-person legal team in Zintan during the ICC president’s visit to the country on Monday. Another consignment of weapons from Libya destined for the Sinai Peninsula has been intercepted by Egyptian authorities.