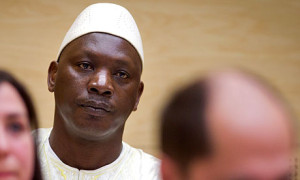 The Hague-based International Criminal Court on Tuesday sentenced Congolese warlord Thomas Lubanga to 14 years in prison for recruiting child soldiers and turning them into killers, rapists and robbers.
In March, the court convicted Lubanga of enlisting children under age 15 and using them during a civil war in the Democratic Republic of the Congo.
Prosecutors said Lubanga led a rebel force that recruited child soldiers and forced some of them to serve in militia roles, including as his bodyguards.
Former child soldiers testified before the court on Lubanga’s misdeeds during the civil war between 2002 and 2003 where at least 60,000 people have been reportedly killed.
The six years that Lubanga spent in custody since March 2006 will be deducted from the 14 year imprisonment sentence.
Lubanga’s case marked the ICC’s first trial and first verdict since the court was established in 2002 to address offenses of international concern, such as genocide and war crimes, through a system of international justice.
The ICC has however been criticized for being too slow and for being justice selectively, as it focuses on Africa and overlooks abuses committed in other parts of the world, including Afghanistan and Iraq.
In another development, the court which is currently conducting investigations in the Central African Republic, Uganda, Kenya, Sudan, Ivory Coast and Libya, announced on Monday that four Kenyans suspected of crimes against humanity will officially stand trial from 10 to 11 April, 2013.
The four Kenyans will be tried in connection with Kenya’s presidential elections that were marred by violence leading to crimes against humanity and displacement of populations over a large area.