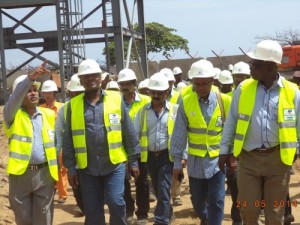 The cement plant built in Douala by the Nigerian billionaire Aliko Dangote with an investment of 50 billion FCFA started production after the launching last month of its marketing on the Cameroonian market, according to Abduhallï Baba, the head of the project. It was revealed that the plant has already made its first shipments delivery of raw materials, including clinker and gypsum and pozzolan produced from a 27-hectare quarry in the city of Tombel (Southwest region), and on which Dangote Cement Cameroon holds an operating license for a period of 5 years.

In anticipation to the start of production, says the project leader, cement conducted tests on its equipment since “more than two weeks.” From the start of activities, Dangote Cement Cameroon aims to produce 1.5 million tons of cement, carrying domestic production to about 3.6 million tons, including 500,000 tons of Morocco Cimaf, and 1.6 million Cimencam tons, a subsidiary of Lafarge.

In November 2014, the Nigerian billionaire Aliko Dangote, after a brief site inspection visit to its plant, he had explained that the delays in the start-up of the cement plant, originally scheduled to be commissioned in January, August and October 2014, was due to issues of mainly technical order. These reasons were cited as congestion at the port of Douala, which slowed the importation of equipment for the construction and installation of the plant.