France, Germany, Italy, Spain, the United Kingdom and the United States have strongly condemned “all acts of violence” rocking Libya since the fall the Gaddafi despotic regime in 2011. 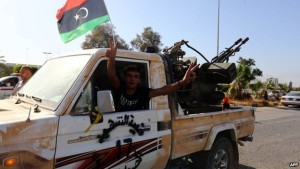 In a joint press release published Tuesday, the six countries have warned that “these attacks undermine the efforts of Libyans who are working to bring peace and stability to the country through the UN-led negotiations”.

They have also said these acts of violence constitute “a major break in the public pledges made by the main commanders to refrain from actions that could harm the political process”, affirming that “there can be no military solution to Libya’s problems”.

The major Western powers urged “all Libyan parties to participate constructively in the UN-led dialogue in order to reach rapidly a sustainable ceasefire and a national unity government”.

They have also said that “the only people who ultimately benefit from continued fighting over Libya’s oil terminals and cities are terrorists”, expressing their concern over the growing presence of terrorist organizations in Libya and over the attacks on the oil fields.

“We remain deeply concerned about the economic impact of the political and security crisis on Libya’s future prosperity”, stressed the six countries, warning that low oil production and prices will worsen further the financial and economic situation in Libya.

The rebel groups that helped to overthrow the Gaddafi regime have split into two rival camps – one based on hardline Islamist ideology and the other a largely secular faction.

Many political analysts and Western countries are concerned over the instability in Libya where armed groups commit widespread human rights abuses with impunity and challenge the authorities of central government, threatening security and undermining the efforts of rebuilding state institutions.

It seems that Libya is imploding into chaos and violence as the central government has no real power and the armed militias are strengthening their position and becoming more entrenched than ever taking control of some oil fields.