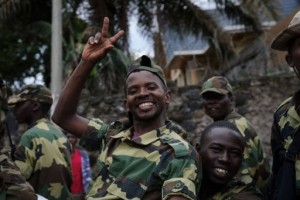 The United Nations Environmental Programme said in a report that DR Congo, militarized international criminal groups are involved in large-scale trafficking of “ore, gold, wood, coal and products of wildlife such as ivory, “which amount to $ 1.3 billion each year.

According to UNEP, the rest of the money generated, or 98%, benefits the “cross-border criminal networks operating in and out of the DRC.”

“These funds captured by criminal gangs (…) could have been used to build schools, roads, hospitals and a future for the Congolese people,” laments Martin Kobler, the head of the UN Mission in DRC (MONUSCO) AFP reminds that the budget of peacekeeping forces in Congo is $ 1.4 billion per year.

According to the UNDP, only 2% – or $1.3 million – net gains of traffic back to the armed groups, however, sufficient to ensure “the basic annual stewardship of some 8,000 fighters” and “allow defeated or disarmed groups constantly surface and destabilize the region.”

The rest of the money generated goes into the pockets of “cross-border criminal networks operating in and out of the DRC,” especially in the neighboring countries (Uganda, Rwanda, Burundi and Tanzania) and allows them to maintain their strategy of “divide to rule “and to ensure that no armed group really can dominate and take over the traffic, the report said.

The region is the home of the Virunga National Park where there are mountain gorillas, an endangered species. “The natural habitats of these gorillas are threatened by deforestation resulting from the manufacture of charcoal,” says the report.

Note that the Democratic Republic of Congo remains plagued by wide-range of conflict between government forces that historically have been backed by Angola, Namibia, and Zimbabwe and rebels supported by Uganda and Rwanda. Much of the eastern part of the country remains embroiled in conflict.