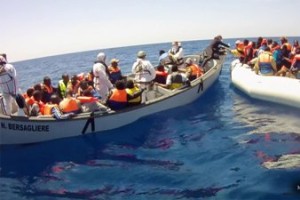 Algerian authorities have turned down a request by the EU to house one of the bases for drones that will be used to destroy migrant smugglers’ installations and boats.

In response to the request, the Algerian authorities said they would beef up security control on their water territories, a diplomatic source said on Monday.

The EU has conducted researches and identified geographic spots that could be used for the operation agreed upon last week during the EU military and diplomatic summit.

Brussels has identified spots at the southern Mediterranean shores.

“The EU has asked Algeria, Morocco and Tunisia for drone bases to monitor illegal trafficking of human beings and drugs,” the diplomat said.

“It has been found that the most appropriate locations for the bases are in the Mednine region of Tunisia, Ain Temouchent province, which is located on the Mediterranean coast to the west of Algiers and Al Hoceima region in Morocco, as well as the island of Malta,” he said.

“The traffickers’ boats use the North African countries before heading for Spain, France and Italy,” he continued.

The EU approved the military plan but is working with North African countries to cooperate as it seeks a UN Security Council Resolution authorizing the military operation that will be headquartered in Italy and led by an Italian Admiral.

Last week the EU said it would be necessary to have the Libyan actors, namely the Toburuk internationally recognised government and the Tripoli-based government, on board as Libya is the main departure gate of the illegal migrants.

The Tobruk government has however denied to cooperate with the EU in its fight against illegal migration unless it gets help in its own fight against the Tripoli government and other extremist groups roaming in Libya.