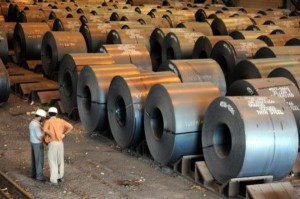 Africa’s largest steel maker, ArcelorMittal in South Africa, has asked the government to impose a 10 percent import duty on steel and in return, may offer shares to black empowerment partners, a newspaper reported.

On Monday, South Africa’s government said it will impose a 10 percent import tariff on steel imports to protect the struggling industry, with the possibility of hiking them further.

“The first application for tariffs at 10 percent of the WTO bound rate will be signed off next week with conditions which are not yet finalized,” Steel and Engineering Industries Federation of Southern Africa (SEIFSA) said in a statement, without giving a firm date for a tariff hike.

The World Trade Organization (WTO) allows countries to raise tariffs by up to 10 percent to protect local industries.

ArcelorMittal South Africa has not made a profit in the past five years and in exchange for protection from steel imports, Bloomberg reported that Mittal would be prepared to offer shares to black South African consortiums.

“We are at a stage where the major shareholder understands that we need an ownership deal and we are putting plans in place to do one. However you need an industry that you can invest in,” a company’s executive said.

The company has warned it could close a plant that employs 1,200 people while smaller rival Evraz Highveld Steel and Vanadium has been placed in the hands of administrators.

“It is a crisis that I have never seen, it’s unprecedented in my history in the steel industry,” SEIFSA President Ufukile Khumalo told reporters.