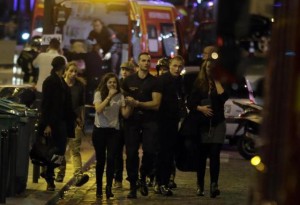 The terrorist attacks perpetrated Friday night in Paris have spurred immediate offers of solidarity and support from world leaders and Morocco’s King Mohammed VI was among the very first to condemn the terrible assault.

Immediately after he heard the appalling news, King Mohammed VI sent to President François Hollande and to the French Prime Minister Manuel Valls messages of condolences and support, condemning the horrifying terrorist attacks and expressing Morocco’s full solidarity with France, a friendly country.

In his message to President Hollande, the King expressed his heartfelt sadness and sorrow at the terrible terrorist attacks that targeted several districts in Paris.

“I present to you and through you, to the families of the innocent victims of these crimes and to the whole French people, my most sincere condolences and ask you to kindly convey my sincere wishes of speedy recovery to the injured,” said the King in his message to the French president.

“I would also like to condemn in the strongest terms, on behalf of the Moroccan people and in my own name, these heinous terrorist acts, and to express our full solidarity and our support in this difficult time,” says the King’s message.

King Mohammed VI had also had a phone talk with the French President to whom he renewed his support to France after the attacks.

In his message to the French Prime Minister, the Moroccan sovereign again condemned in the strongest terms the atrocious terrorist attacks and renewed Morocco’s full solidarity with France.

“It is with deep emotion that I learned the sad news of the cowardly terrorist attacks that simultaneously targeted this Friday neighborhoods of Paris,” said the king who expressed his confidence that “French security forces will defeat the perpetrators of these horrific crimes,” and that “thanks to the mobilization and determination of the French people in defending their noble values, your friendly country will succeed in coping with this horrific experience.”

The series of terrorist attacks in Paris Friday night have claimed the lives of up to 129 people and injured 350 persons, including 99 who are in a serious condition. The death toll could have been much heavier if all the explosives, discovered by the investigators after the carnage, had burst out.

The coordinated attacks were perpetrated in a busy district of Paris by three teams of terrorists with uncovered faces, who were wearing explosive belts and armed with Kalashnikovs. They shot at random at diners and passersby, and invaded the Bataclan theatre where they carried on their random shooting and took hostages.

According to the Paris Attorney General, during the brief exchange between the terrorists and French forces within the theatre, the assailants spoke of Iraq and Syria. Two of the terrorists have been identified, one is French and the other is a Syrian.

The IS group, which has often vowed to strike France in retaliation of its participation in the fight against the terror group in Syria and Iraq, claimed responsibility for the Friday assaults and said that “this attack is only the beginning of the storm.”

The Friday attacks, committed few months after the terrorist assault against Charlie Hebdo in January this year and nearby the former offices of the satiric magazine, show an escalation in the terrorists’ activities. It is actually the first time that terror operations are carried out in France by suicide bombers. Seven bombers have reportedly been killed. Some alleged accomplices of the terrorists have been arrests in Belgium Saturday.