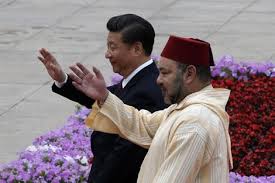 The strategic partnership sealed Wednesday in Beijing by King Mohammed VI with China has opened up new cooperation opportunities for Morocco as this giant Asian country is regarded as an economic and military power.

During his landmark visit to China, the Moroccan sovereign signed with President Xi Jinping a joint statement setting the goals and the priority sectors the two countries will focus on in their bilateral cooperation to enhance trade exchanges and coordinate stands in international fora on issues of common interests.

These cooperation opportunities will be fully materialize at the level of Africa, as both Morocco and China are expanding their presence in the continent. The two countries will thus foster their joint actions in the African continent as partners and not as competitors, and will promote “win-win” partnership in all sectors.

The North African country needs Chinese know-how and support as the country’s socioeconomic development is in full swing and braces to host the next UN climate change conference (COP-22) while its new industries (automobile, aeronautics, offshore…) are growing rapidly and attracting more and more interests of investors.

For its part, China, one of the five permanent members of the UN Security Council, pledges to support Morocco and rev up its efforts to maintain national stability and enhance social and economic development.

In their joint statement, the two countries vowed to foster coordination on strategic issues and enhance cooperation ties between legislative bodies and political parties.

They also reaffirmed the principle of respecting all countries’ sovereignty and territorial integrity, and pledged to support efforts to maintain peace and stability of their regions.

Beijing and Rabat also called for peaceful solutions to international and regional disputes and condemned terrorism in all its forms.

In a bid to boost trade exchanges and encourage Chinese nationals to visit Morocco, King Mohammed VI has decided to give a visa waiver for Chinese citizens as of June 2016.