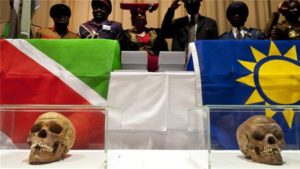 German government plans to formally apologize to Namibia for the extermination of its indigenous citizens a century ago, senior official of the German foreign ministry told reporters on Wednesday.

Bilateral talks about a joint government declaration, which explicitly refers to the massacres as genocide, are due to be concluded before the end of the current year, according to the German Foreign Ministry.

“We are working towards a joint government declaration with the following elements: common discussions on the historical events and a German apology for the action in Namibia,” the spokeswoman for the German Foreign Ministry, Sawsan Chebli, told reporters.

German troops killed more than 75,000 members of the Herero and Nama tribes between 1904 and 1908 in what was then called South-West Africa. Germany ruled the African country as a colony from 1884 to 1915.

It was not until 2004 (a century after the massacre) that Germany formally apologized for the atrocity.

Namibia is today a poor country of less than 2-million people. A small minority of some 100,000 or so are whites (many of them descendants of the original German settlers.) Some still own vast farmlands illegally seized more than a century ago.

However, Germany said the apology would not carry any obligation of reparations.

The two countries are also to set up an investment program, which would oversee the development of new infrastructure in Namibia, such as a sea water desalination plant.