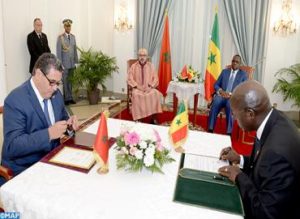 Morocco and Senegal, which are bound by a centuries-old friendship and multi-faceted cooperation, are again offering this week a telling example of their partnership and their shared resolve to enhance south-south cooperation.

This started on Sunday, when King Mohammed VI, in an unprecedented move, addressed the speech marking the Green March, a Moroccan national event, from the Senegalese capital, Dakar.

President Macky Sall welcomed the decision as an additional token of the special ties binding the two countries and King Mohammed VI underlined, in his speech, “the fraternal bonds, based on solidarity and a shared destiny, which have historically existed between the Moroccan and the Senegalese peoples, who stand as one single people, with each one forming a natural extension of the other, in a unique symbiosis between two independent countries respecting each other’s particularities.”

And to give further substance to this cooperation, underpinned by a spirit of co-development and solidarity, the two heads of State co-chaired, Monday and Tuesday, the signing ceremony of several agreements, including two on the implementation of the Moroccan-Senegalese agricultural partnership program, and the launch of socio-economic projects.

Under the agreements, Senegal will benefit from Morocco’s experience in terms of promoting small-scale farming and rural development, vocational training, technology transfer and fisheries.

The octopus development plan focuses on the preservation and protection of the species and the replenishment of stocks.

On Tuesday, the two heads of state chaired the launch ceremony of an Entrepreneurship Training Center.

At a ceremony in Dakar Hospital, attended by the Senegalese President, King Mohammed VI donated to the Senegalese National Council for the fight against AIDS 1.6 tons of medicines for the treatment of opportunistic diseases and infections caused by AIDS/HIV.

The donation is offered by the Mohammed VI Foundation for sustainable development.
This Moroccan Foundation, set up in 2008, is very active in Senegal where it built and equipped the Mohammed VI Ophthalmology Clinic of Dakar in 2013.

According to the head of the foundation, Mustapha Terrab, some 16,000 medical checkups and 800 ophthalmological surgeries are conducted on a yearly basis in the facility.

The clinic also ensures the training of Senegalese medical staff.

The Foundation, which is co-partner in the just launched Entrepreneurship Training Center, is also involved in building a small-scale fish unloading site in Soumbedioune in Dakar. The site will be operational by end 2017.
All these projects reflect the two countries’ common will to share know-how and expertize and translate the Moroccan King’s African strategy and vision of a south-south cooperation based on solidarity co-development.