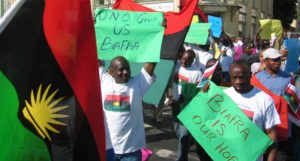 Nigerian security forces led by the army have carried out the executions of at least 150 peaceful pro-Biafra protesters in the Southeast of Nigeria, Amnesty International said in a report on Thursday.
“The military should not be involved in managing or responding to peaceful demonstrations or gathering. The Nigerian government should initiate prompt and impartial investigations into allegations of killings, torture, arbitrary arrests and detentions, incommunicado detention and excessive use of force in the southeast of Nigeria“says Makmid Kamara, the Director of Amnesty International in Nigeria.
The Right group’s 62-page report said the military fired live ammunition, with little or no warning, to disperse members of the Indigenous People of Biafra group known as IPOB between August 2015 and August 2016.
The report include 87 videos and 122 photographs showing IPOB gatherings and members of security forces in the process of committing violations and victims of these violations. 193 interviews were conducted.
A military statement said soldiers “exercised maximum restraint” in response to violent protesters who in one instance killed five police officers. It accused secessionists of “a reign of hate, terror and ethno-religious controversies … (threatening) national security.”