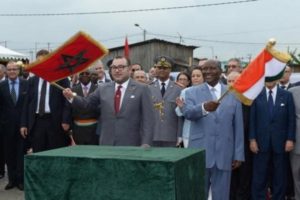 Cooperation between Morocco and Cote d’Ivoire is gaining momentum in all sectors and is gearing up towards a sound strategic partnership serving the interests of the two countries which are sharing strong friendship ties and secular relations.

King Mohammed VI paid a friendship and working visit to this country Feb.24-27 at the invitation of President Alassane Ouattara during which the two leaders had talks on bilateral relations and latest developments on the regional and international scenes, according to a joint statement released in the wake of the visit.

The two Heads of States hailed the excellent cooperation ties existing between the two countries which had already signed 143 agreements and stressed the need to follow up the implementation of these agreements, says the document.

They also welcomed the outcome of the second session of the Morocco-Côte d’Ivoire Economic Impulse Group held lately. The group seeks to set a genuine strategic partnership between the public and private sectors of the two countries.

The governments of the two nations pledge to work to implement the recommendations issued by this group in line with the vision of the two Heads of State, determined to make of bilateral cooperation a true model of South-South cooperation in Africa, adds the joint statement. The 2nd Session of the Moroccan-Côte d’Ivoire Economic Impulse Group was crowned with the signing of 14 cooperation agreements in housing for low-income families, infrastructure, transport, logistics, banking, finance, social economy, solidarity and handicraft, health, digital economy and industry.

During this visit, King Mohammed VI and president Ouattara visited the rehabilitation of Cocody Bay project to see the progress made in upgrading this Bay which suffered severe environmental degradation in recent years.

It is the Moroccan public company Marchica Med which is project managing the site and supervising this landmark ecological undertaking to cost around 450 million dollars.

During his visit to Côte d’Ivoire, the Moroccan Sovereign inaugurated some projects financed by the Mohammed VI Foundation. He was also informed by President Alassane Ouattara about the progress made by his country in the fields of democracy, the fight against poverty and against terrorism.

Alassane Ouattara welcomed Morocco’s return to the African Union, stressing the decisive role that the North African Kingdom will play within its institutional family and in consolidating peace and security in the continent, says the joint the statement.

“This return clearly shows the will and determination of the King of Morocco to engage in South-South cooperation and to participate fully in the development of the continent, as shown by the Morocco-Nigeria pipeline project, which will cross West African countries including Côte d’Ivoire and will benefit the whole region”, underlines the document.

For his part, King Mohammed VI commended Côte d’Ivoire for its support to Morocco’s return to the AU and pledged to back this African country’s candidacy as a non-permanent member of the UN Security Council for the 2018-2019 term.

The two Heads of State reiterated their determination to endeavor for a more united and solidarity-based Africa able to combat terrorism, cybercrime, maritime piracy and drug trafficking.

Concerning conflicts in Africa, the two African leaders say they support durable and inclusive political solutions to the crises in the continent.