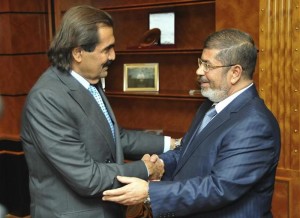 Government officials from Qatar and Egypt are currently discussing the details of a $2.5bn Qatari aid package, by way of special IPO agreements in dollars. These negotiations began a week after Qatar announced that it would provide Egypt with an additional $2bn in addition to an already agreed upon $500m package.
The cabinet is discussing the proposed agreement with Qatar’s Ahly Bank to obtain funds as fast as possible and it also analyzed the consequences of expediting the release of the contract. A contract has been signed between the Ministry of Finance and the Qatar National Bank and the transfer of the IPO will be done in accordance with the service provisions stipulated in the contract.
A high level government source said that in order to expedite the process, the government would need to appoint a number of IPO managers, local and international law consultants and payment agents as stipulated in Egypt’s law governing tenders and auctions and an agreement covering the sale of the IPO’s and government bonds over the next 3months is to be made public very soon.
Critics say Qatar’s determination to help at all cost is a “short sighted” ambition and is also not in accordance with international standards. The Qatari proposal is yet to be accepted by the government.
Egypt’s credit rating continues to be downgraded, leading many countries to be averse to investing in Egypt for fear of increased risk and an unstable market. Government bonds are in the process of being approved to be traded on the world market, and inserting them onto the Luxembourg stock exchange.
According to Minister of Planning Ashraf Al-Arabi, Egypt’s foreign currency reserves have hit $14bn, while the acceptance of Egypt’s IMF loan stipulated that those reserves must increase to $20bn.