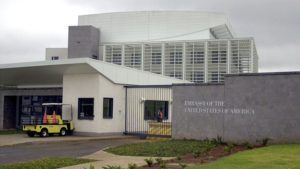 The U.S. State Department has warned its citizens of possible unrest that could turn violent, ahead of general elections slated for Aug. 8 in Kenya.

A year ago, Police in Nairobi used tear gas and water cannon to break up rallies urging resignation of supervising body in run-up to August vote.

Authorities face pressure to prepare carefully to ensure a peaceful vote in a country where ethnic loyalties often trump policy among voters.

“Rallies, demonstrations, and protests may occur with little notice and even those intended to be peaceful can escalate into violence,” the State Department said in a travel alert.

“As with all large events, there is also the opportunity for criminal elements or terrorists to target participants and visitors,” the State Department warned.

The State Department also advised citizens to avoid traveling to the north-eastern Kenyan cities of Mandera, Wajir and Garissa, the coastal counties of Tana River and Lamu in their entirety, plus all areas north of Malindi in Kilifi County, and the Nairobi neighborhood of Eastleigh.

While the last elections in 2013 went off peacefully, Kenya is still haunted by the 2007 vote, when alleged rigging set off violence that killed an estimated 1,200 people and displaced 600,000 Kenyans.