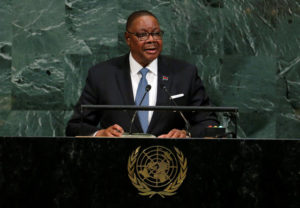 President Mutharika is accused by the Malawi Congress Party (MCP) for receiving a kickback from a $4 million government contract.

Other voices, including civil society organizations, in the southern African nation are also calling on the president to resign.

Peter Mutharika called the allegations “fake news” designed to smear him ahead of an election next year.

He said in a statement that he did not personally benefit in any way from the contract and that’s why he is concerned about the “lack of truth.”

Malawi is one of the poorest countries on the planet. Mutharika, at the helm of the country since 2014, is said to be re-elected next year.

Local media reported that the company has deposited 145 million Malawian kwacha ($203,000) into an account belonging to the ruling party and of which Mutharika is sole signatory.

As a reminder, government graft allegations have become routine in Malawi since the 2013 corruption scandal in which senior government officials siphoned millions of dollars from state coffers.

It was the biggest financial scandal in Malawi’s history. Known as “cashgate”, it has affected the country’s relations with donors and caused outrage among Malawians. Up to 40% of Malawi’s annual budget is donor-funded.