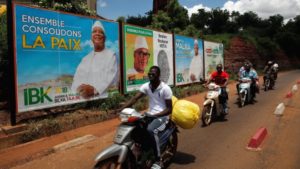 After a campaign marred by violent incidents and amid concerns that the vote could not be held in some restive areas, more than 30,000 personnel have been drafted to ensure security of 23,000 polling stations.

Mali’s national broadcaster ORTM reports a large turnout of voters in the capital Bamako. But, the United Nations’ mission in Mali, MINUSMA, said that the voting started slowly in other areas, especially in the unstable region largely controlled by militants.

According to head of the UN mission, Olivier Salgado, the voting was briefly suspended at a polling station in a village in the northern region of Kidal after the firing of about 10 mortar shells.

In a separate incident, unidentified gunmen burned polling stations and ballot boxes in the village of Lafia, in the northern Timbuktu region.

The presidential candidates included businessmen, an astrophysicist, and just one woman.

President Keita, 73, is criticized for having been unable to restore security despite the presence of multinational forces in the country. In the August 2013 elections, President Keita won more than 77% of the vote in a run-off.

Keita’s challengers are headed by Soumaila Cisse, 68, a former finance and economy minister, who lost by a large margin in the second round of the 2013 election.

The European Union, the African Union (AU), the Economic Community of West African States (ECOWAS) and the International Organization of La Francophonie (OIF) have sent observers to Mali.