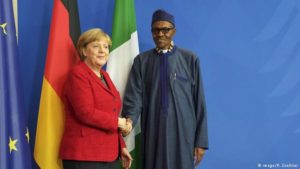 The Chancellor is accompanied by a large economic delegation, deputy government spokeswoman, Ulrike Demmer said ahead of her trip. “All three countries face huge challenges when it comes to economic and social development,” the spokeswoman said.

The three nations are considered important dialogue partners for the German government, particularly in stemming migration and boosting the fight against jihadism, and there is a need to strengthen and shape their economic growth to benefit all citizens, the official added.

Merkel has placed a strong focus on African diplomacy in recent years, and has called on African countries to do their bit in stemming the flow of migrants to Europe — an issue over which she faces criticism at home.

After her talks in Dakar Wednesday with President Macky Sall on his country’s economic development and on regional cooperation, Angela Merkel will hold a meeting in Accra with Ghana’s President Nana Addo Dankwa Akufo-Addo Akufo this Thursday.

Talks are expected to focus on ways to bolster German-Ghanaian ties, as well as on the two countries’ cooperation in addressing the challenges of sub-regional security and migration issues.

After her meeting with the President, Chancellor Merkel would participate in a German business-organised round table that will focus on private investment linked to the G20 “Compact with Africa” initiative.

On Friday, Merkel is expected in Nigeria where she will first meet with the president of the Economic Community of West African States (ECOWAS), Jean-Claude Brou, to discuss cooperation between Germany and the community of 15 countries. She will later meet with Nigerian President Muhammadu Buhari.

Imports from sub-Saharan Africa accounted for only 1.1 percent of total foreign trade in 2017.