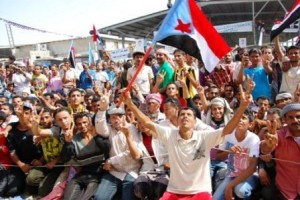 Tensions in Yemen have been mounting as the Southern part of the country continues to seek for its re-independence from the north. In the latest events related to their demands, they held a mass protest in the southern city of Aden demanding for a scission as they commemorate the 42nd anniversary of the creation of the Southern army.
The northern part of the country has been trying to maintain the integrity of the territory that it was able to attain in 1990 when two sides were united. However, the separatist Southern Movement is determined to see the region become an independent state. It was the organizer of the protest which brought thousands out to protest against the government.
In the crowd, protesters were waving flags of the formerly independent south before its fusion with the north. They also shouted anti–government chants against the government. The protests were fueled by the government’s apology for the atrocities that it had carried out during the 1994 civil war. The war was provoked by the South’s decision to break away from the union.
These apologies were strongly slammed by the southerners. They reminded the government led by President Abd Rab Mansour Hadi that what they want is to become an independent sovereign state. “We reject apologies,” and “Our demand is freedom and independence” were they major slogans.
President Hadi has embarked on promoting national reconciliation through dialogue in order to draft a new constitution and prepare new elections. The rebels from the north have not rejected the apologies.
The south doesn’t want to entertain any sort of dialogue. Protesters were shouting they want “no dialogue, no negotiations” because “we are masters of our decisions.”