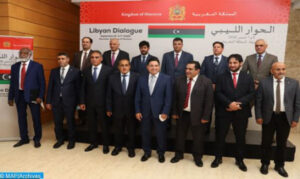 The delegations of the Libyan High Council of State and the Parliament of Tobruk meeting Bouznika, a coastal city to the south of the Moroccan capital Rabat, in order to maintain the ceasefire and open the way to a peaceful solution, have reached an agreement.

In a joint statement released Thursday after five days of talks, the two parties announced that they reached a comprehensive agreement on the criteria, mechanisms, and objectives for “assuming positions of sovereignty.”

Both parties vowed to continue the dialogue launched in Morocco and to resume these meetings during the last week of this month in order to complete the necessary measures to ensure the enforcement and activation of this agreement, said the final joint statement read out by Driss Omran of the Libyan House of Representatives, in the presence of Foreign Minister Nasser Bourita.

The two parties to the dialogue called on the UN and the international community to support Morocco’s efforts to create the right conditions and a conducive climate to achieve a comprehensive political solution in Libya, reiterating their thanks and gratitude to the Kingdom and to King Mohammed VI for their support and assistance to overcome the Libyan crisis and fulfil the Libyan people’s aspirations to build a civilian and democratic State that enjoys peace, security and stability.

The two parties affirmed that their meetings in Bouznika took place in “a friendly and fraternal atmosphere marked by understanding and consensus.”

Underlining that both sides are aware that the current situation in the country, at different levels, is extremely dangerous, the joint statement explained that the situation is resulting from negative foreign interventions that threaten the security, territorial integrity and sovereignty of Libya as well as regional instability.

The High Council of State and the Parliament of Tobruk met in Morocco with the aim of overcoming their differences, aware of the “serious repercussions” of Libya’s political and institutional division. Such a division has created poor living conditions for the people of Libya and weakened Libyans’ confidence in the country’s legislative, executive, and monitoring institutions.

Both parties also stressed that these meetings took place in application of Article 15 of the Libyan political agreement reached in Skhirat and in confirmation of the conclusions of the Berlin conference, which both support a political solution to the Libyan crisis. The Bouznika dialogue was also in line with the relevant Security Council resolutions.

The results achieved by Bouznika inter-Libyan dialogue, have evidenced Morocco’s role as a key mediator in the Maghreb.

The two parties had earlier expressed their gratitude to Morocco for facilitating the talks that focused on fostering the ceasefire decreed on August 20, and means of moving forward, free of harmful foreign meddling, to put an end to institutional divisions.