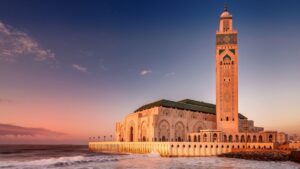 Morocco condemned in the strongest terms the publication of offensive cartoons of the prophet Muhammad as a provocative act showing the “immaturity” of its perpetrators, the foreign ministry said.

“The Kingdom of Morocco denounces these acts which reflect a lack of maturity of its perpetrators and reaffirms that the freedom of expression ends where the freedom and the beliefs of others start,” the foreign ministry said in a statement.

The freedom of speech can in no way justify provocation and offense to the Islamic religion followed by more than two billion faithful across the world.

“As much as Morocco denounces all obscurantist and savage acts that are wrongly attached to Islam, it rejects the provocations offending the sacredness of the Islamic religion,” it said.

Morocco, like the rest of Arab and Islamic states, call for putting an end to igniting resentment and urges wisdom and mutual respect as a sine qua non for co-existence and calm dialogue between religions.

Morocco’s Higher council of Muslim Scholars strongly also denounced any attempt at offending the sacredness of the Muslim religion, after the campaign was launched in France to publish cartoons attacking the Prophet.

In a statement, the council said in no way can the freedom of speech justify offense.

It stressed that such acts of provocation derail from the teachings of all the prophets, including Prophet Muhammed, notably the values of love, brotherhood and solidarity between people to all humanity

The publication of offensive cartoons mocking the prophet was met with indignation in many Muslim states going as far as reviving boycott campaigns targeting French products, notably in the Middle East.