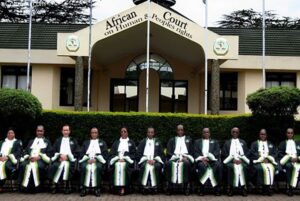 Seized by a Beninese citizen whose name was not disclosed, the African Court on Human and Peoples’ Rights on Friday issued a very critical decision for power in Porto Novo, finding that the Constitution revised by Parliament in November 2019 must be repealed. The ACHPR accuses the authorities of having “violated the ideals of the 1990 Constitution” and orders the return to this text before the next presidential elections next year.
For the ACHPR, this constitutional revision was in violation of the African Charter on Democracy, Elections and Governance and its “principle of national consensus”. This text of the African Union adopted in 2007 is, according to the ACHPR, binding on the signatory countries, including Benin.
For the Court, the two means of reaching this “consensus”, namely the “consultation of all stakeholders” or the “referendum”, have not been followed, and the reform was adopted by a Parliament fully committed to President Patrice Talon after the unopposed legislative elections of April 2019.
The court concluded that this text “breaks the social pact and raises fears of a real threat to peace in Benin”, it therefore ordered its repeal before “any election”, while the presidential election is set for April 11.
This decision came as no surprise to opponents, who believe the government has been acting “for a long time on the margins of legality”, and are still demanding the withdrawal of controversial laws such as the digital code and the sponsorship system for the presidential election.
On the government side, there is no official reaction for the moment, but in its entourage, there is talk of “non-event” and new “interference” in the country’s internal affairs.
Benin had withdrawn at the end of April from the additional protocol allowing individuals to bring cases before the court, after the latter had issued several decisions in favour of the exiled opponent Sebastien Ajavon, including that of 17 April, requiring the suspension of communal elections.