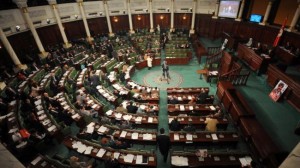 The rise of terrorism in Tunisia has forced the law makers to convene a meeting limited only to the subject. Members of the constituent assembly held a debate on the phenomenon which is on the rise in the country. The Minister of Justice Ben Salah Hafedh was present at the session. Tunisia’s terrorism law is just over a decade old but it is being deemed outdated.
Islamist extremists are becoming prominent in the country. Some of them have turned to violence thereby threatening the security and stability of the state. Since 2011 when President Ben Ali was forced from power after a national revolution against his regime, maintaining public order has been a challenge for authorities. Two high profile opposition leaders have been assassinated, scores of security staff killed, and even government ministers have been targeted.
Speaking about the necessity to reform the terrorism law of 2003, the vice president of the Constituent Assembly Meherzia Labidi stressed that terrorism is no longer limited to violence but also has socio-economic consequences on individuals. He said that “the gravity of the terrorism on the country’s economy, society, education, and even in people’s mentality, the terrorism has influences everyone’s life.” The 2003 anti-terrorism law does not define the acts which could be considered as terrorism.
Mersni Sana, a member of the Assembly, said they “need to propose new articles to ensure the national security forces’ personal safety.” The new law is expected to provide the framework for large-scale military action to protect the country from terrorism. Minster Hafedh listened to the recommendations and proposals of the assembly members.
Last month, an attack in the Interior Minster’s home left four policemen dead. President Moncef Marzouki declared May 28th a national day of mourning in their honor.