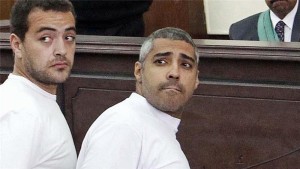 A statement from the presidency said the pardon was granted to individuals who have received final prison verdicts in cases related to breaking a protest law or infringing on the police forces’ actions. Some inmates were pardoned for health-related and humanitarian reasons.

Mohamed, Fahmy and Peter Greste were sentenced to three years in prison on Aug. 29, following a retrial of a 2014 decision that critics said was based on ludicrous charges and a lack of incriminating evidence.

They were arrested in 2013 while working for al-Jazeera network. They were charged with airing false news and aiding the Muslim Brotherhood.

Abdel Fatta al-Sisi’s pardons came as he was preparing to fly to New York for the 70th session of the United Nations General Assembly and followed a hail of international criticism over Egypt’s practice of routinely jailing journalists and activists to silence dissent.

Earlier in September, the Canadian government formally requested that the Egyptian government pardon Fahmy or deport him to Canada.