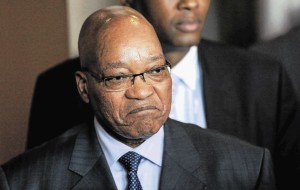 Demonstrations are taking place across South-Africa today in protest against President Jacob Zuma’s decision to fire the finance minister Nhlanhla Nene last week; a move that pushed the national currency to hit an all-time low record.
Nene was replaced by ANC MP David van Rooyen, who a few days later was replaced by former Minister of Finance, Pravin Gordhan.
Gordhan became the country’s third finance minister in less than a week. He previously occupied the post from 2009-14, and is considered a safe pair of hands to guide Africa’s second-largest economy.
Gordhan promised to uphold South Africa’s spending ceiling, reform failing state-owned enterprises and protect the country’s credit rating, but the dramatic U-turn of Zuma caused a relief rally in South African assets. It also fuelled speculation that the ruling party might make the 73-year-old relinquish the reins of power because of the damage done to the nation’s economy.
South Africans took to social networks to express their discontentment, calling for the removal of the President with the hashtag #ZumaMustFall.
However, spokesman Zizi Kodwa said top officials in the African National Congress (ANC), had not contemplated such drastic action.
“I can confirm that there was no discussion of recalling the president,” he told a news conference on Tuesday.
According to the party’s Jessie Duarte, South Africans are entitled to express themselves.
“All of these people have rights. They are citizens of the country. If they wish to march, that’s their right to do so. It’s the way in which they’ve chosen to express themselves. We obviously don’t support their call at all as the ANC,” she said.