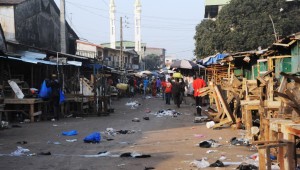 Guinea’s opposition called for a nationwide strike on Wednesday to protest the high living costs and the government’s refusal to cut down fuel prices in the west-African poorest nation.

Opposition leaders urged Guineans to remain at home and not to engage in any acts of vandalism.

On Wednesday tens of thousands of workers took part in the protest movement that closed factories, shops, banks and offices in the capital Conakry and other major towns.

Most schools were closed and hospitals provided only emergency services. Many of the street markets shut, local media reported.

The Guinean opposition’s call for strike follows the trade union federations, which last month called for a “ville morte” day, which literally means “ghost town” where all activities stopped to demand cuts in the price of food, fuel and other basic commodities.

Guinea, a country of close to 11 million people, is recovering from the effects of Ebola, which killed over 2,500 people.

The west-African nation holds the world’s largest reserves of aluminum ore bauxite, but this has not halted class struggle. A three-week general strike in Guinea in 2007, which included bauxite workers, won big concessions from the dictatorial regime of then president Lansana Conte. He was forced to appoint a new prime minister from a list supplied by the trade unions.