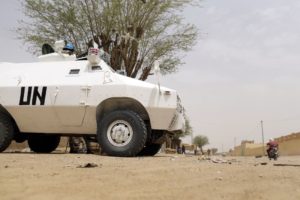 The United Nations peacekeeping mission in Mali said five of its peacekeepers from Chad were killed and three were wounded in the north on Wednesday when their vehicle hit an improvised explosive device.

According to preliminary information, the convoy hit an improvised explosive device and then came under fire by an unknown group of armed assailants approximately 15 km north of Aguelhok, Kidal region.

No group has claimed responsibility for the attack, but the attack bears resemblance to the modus operandi of al-Qaeda-affiliated militants, local media reported.

A peace accord signed last year was meant to bring stability to the arid region, but attacks against the UN mission, Malian military and civilians are still frequent.

The latest attacks highlighted the vulnerability of Mali’s sprawling, arid north, where UN troops and Malian soldiers are struggling in their fight against jihadists who seized vast swathes of territory in 2012.

The UN mission, known by the acronym MINUSMA, has been particularly deadly for UN peacekeepers and seen sharp internal tensions since its launch in July 2013.

12 peacekeepers had been killed since the start of the year in dozens of attacks in the Kidal region, where Wednesday’s assault took place.