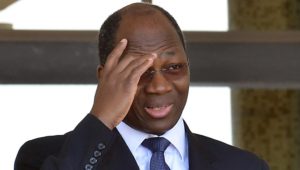 Over five thousand supporters took to the streets in Reo, a city located in the northern part of Burkina-Faso, to demand the release of Djibril Bassolé.

Djibril Bassolé, a former powerful minister under longtime leader Blaise Compaore, was arrested in mid-September last year. He was accused of supporting a coup against the interim government in the west-African nation.

Bassolé was charged with treason, attack on state security and complicity in murder, primarily on the basis of a leaked telephone conversation he allegedly had with Ivory Coast’s Parliament Speaker Guillaume Soro.

As a reminder the presidential guard led by General Gilbert Diendere took the interim president, prime minister and cabinet members hostage in mid-September last year, before scheduled elections. Protests erupted against the revolt, and Diendere was forced to hand back power after a week.

They were all arrested and detained by police awaiting their trial.

Bassolé who was previously a joint U.N.-African Union mediator in Sudan’s Darfur conflict, has accused authorities in the west-African nation of detaining him for political reasons. He has requested the United Nations Commission on arbitrary detentions to examine his case.