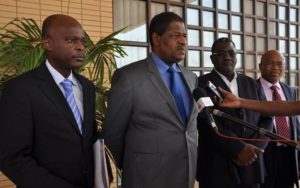 While Togo’s Law Commission started a meeting on Friday to discuss the government’s draft legislation on constitutional amendments, an official ECOWAS delegation is currently in Lomé to try to defuse tensions between the Government and some opposition parties, hostile to the reform.

The delegation, led by Alain Marcel de Souza, president of the Commission of the Economic Community of West African States (ECOWAS), held consultations with all parties, whether from the government or from the opposition, as well as with delegates of the civil society, including trade unions, religious leaders…

Alain Marcel de Souza told the media that he perceived a willingness on the part of all sides to engage in dialogue, to do the reforms.

“From the consultations we had, it appears that there is a will for dialogue, to undertake reforms” demanded by the opposition and many Togolese.

The demands stretch back to over a decade – Faure, who is the current President of the Conference of Heads of State of ECOWAS, has been in power for 12 years and has three more years on his current and third term.

The draft bill examined by the Law commission aims to reform three articles of the Constitution. Articles 52 and 59, which will henceforth stipulate that the President of the Republic be elected for a five-year term, and be eligible for re-election only once, limiting thus the number of presidential terms to two.

Once reformed, the third article, N° 60, will restore the election of the president through the uninominal suffrage, according to a majority, two rounds system, and no longer through a one round system, as is the case at present.

These changes will make it possible to reset the counters for the current Togolese President Faure Gnassingbé. He could thus remain in power until 2030, a situation deemed unacceptable by the opposition, which is denouncing anti-democratic maneuvers.

The opposition is adamant against deleting in the new text the phrase “”in no event shall any one serve more than two terms” stated in the 1992 Constitution. The opposition is counting on this phrase to prevent the current president from running for a new presidential race.