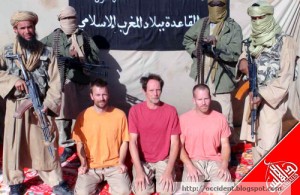 As the situation in northern Mali is deteriorating by the day and as voices from inside the country are mounting calling for a military intervention to stop the Al-Qaeda-linked Islamists who have enforced an austere version of sharia law, destroyed ancient cultural and religious shrines and surrounded cities with landmines to trap residents, the international community is still too hesitant as how to help the Malian interim government.
In view of this lethargy, the Malian Parliament has called for the intervention of the army to restore the country’s territorial integrity and urged the entire Malian people to resist the occupation by all means.
Meanwhile, protesters from northern Mali took to the Bamako streets on Wednesday to decry the takeover of the vast northern region by the Islamists. The protesters voiced willingness to take up arms in defense of their territory if the army does not want to go to war against the occupiers.
While the Malians are losing patience, world powers are limiting themselves to making statements denouncing the situation in the rebel held territory, stressing the need to restore Mali’s integrity and voicing opposition to the establishment of international terror bases that would threaten peace and prosperity of the whole region.  Mere wishful thinking!
Neighbouring countries such as Mauritania, Senegal and Algeria are in a wait and see position although Algeria has strengthened its armed forces at the border with Mali, that it declared a military zone in a state of alert.
According to local media, over 3,000 soldiers, helicopters, and aircrafts were deployed in the region at the end of June and goods transport by road has been suspended.
Meanwhile the UN Security Council is still considering a resolution that would authorize the ECOWAS proposed African force to assist Mali to win back its territory.
Although the ECOWAS heads of state had authorized the deployment of a 3,300 strong Mission in Mali as early as May the Community is still waiting for the UN green light.
Some observers impute this dithering to the threats voiced by Al-Qaeda in the Islamic Maghreb (AQIM) which said it would act “with firmness and determination” against anyone collaborating with any Ecowas or foreign intervening force in north Mali.
The Movement for Oneness and Jihad in West Africa (MUJAO), another Islamist militant group in northern Mali, also threatened countries who would join a military intervention force.
Awaiting a firm decision on the part of the international community, Mali is continuing its descent into chaos.