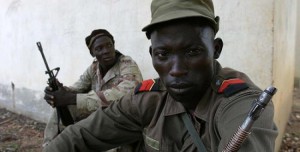 If the violence in Central African Republic (CAR) is proving hard to control, it can be blamed on the easy access of weapons and ammunitions from around the globe. Control of the country is divided between the Muslim Seleka rebels in the north and the anti-Balaka militia heavily present in major cities. U.N peacekeepers are trying to maintain calm as an interim government oversees the affairs of the state.

Violence is however far from ending because the country is flooded with different types of arms and ammunitions with Type 82-2 hand grenades, one of the most widespread military items in CAR, costing between 50cents and one dollar. The findings of Conflict Armament Research group based in the Great Britain highlighted that violence is being fuelled by supplies from several countries; apart from the weapons taken from the army’s armories. Grenades are mostly from China and Bulgaria, Sudan provides the mortars, rocket launchers from Iran, shotgun rounds originating from Cameroun and Spain while bullets come from Britain, Belgium and Czech Republic. Some other countries are involved too. The report was destined for the European Union.

There are fears that even if fighting comes to an end and a government is elected, security will still be fragile in the country because most of the circulating weapons are small and can easily be concealed. Both Seleka and anti-Balaka have been accused of committing serious human rights abuses.

The report stated that most of the weapons are believed to have been smuggled in by foreign mercenaries or flown in from Sudan to the capital Bangui.