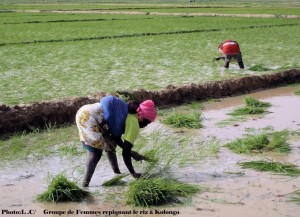 Mali, West Africa’s second largest rice producer after Nigeria, has produced 2,451,321 tonnes of rice in 2015, up 13 percent from last season, government statistics showed on Thursday
Mali produced 2,166,830 tonnes of paddy rice during the 2014/15 season.
The landlocked country will largely finish harvesting this month, according to the ministry of rural development, which said about 55 billion CFA francs ($94 million) had been invested in the sector, mainly to provide fertilizer.
The remaining harvesting is unlikely to add significantly to the season’s total output.
The ministry is projecting a surplus of 285,000 tonnes, or some 11 percent of the total crop of unmilled, paddy rice, above anticipated domestic consumption.
“The increase this year is generally explained by good rain, an increase in planted land, new strains like ‘Nerica’, the use of more fertilizer especially with the help of subsidies,” said Balla Keia, head of the ministry’s statistics division.
Last season, the West African nation produced 2,166,830 tonnes of paddy rice.
However, low rainfall is contributing to increase hunger in the country, where some parts are under rebels’ control.
Mali’s President Ibrahim Boubacar Keita addressing global heads of state gathered at the recently-concluded Paris Climate Conference spoke of the deaths of lakes and rivers due to inadequate rainfall. Referring to Africa’s third-largest river and the main source of water for people, livestock, and crops in Mali, Keita asked, “Will we be able to irrigate our crops from the Niger River?”