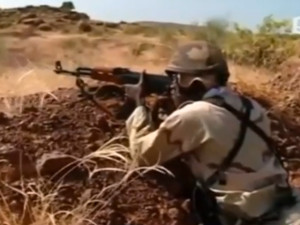 Despite French and African troops intervention in Northern Mali to drive Jihadist militants out of the country, uncertainty is still looming on the region as armed groups seem to have come back to take revenge for their fighters killed in the French-led bombings started in January.
According to press reports, armed groups have launched attacks against the city of Timbuktu over the past few days, wounding and killing a number of Malian soldiers and giving thus a signal that they have not been defeated and that they are not giving in.
As France is contemplating to withdraw most of its 4,000 strong force from Mali by the end of this year or even earlier and as speculations abound on when a UN peacekeeping force will take over as decided by the UN Security Council, recent events in Timbuktu showed that a hasty withdrawal might be very risky. Meanwhile pundits are warning that the Malian dishevelled army is still weak and that the African forces deployed in the West African country lack coordination.
The European Union which seems fully aware of the situation has speeded up the setting up an EU Training Mission to train the Malian army and endow it with the capabilities to ward off any new Islamists’ attacks and to preserve the country’s security.
The decision to set up the EU Training Mission was made last December, before the launch of the French-led operation on January 11, but the persisting unrest prompted the EU to speed up the operation.
The European Union Training Mission in Mali (EUTM), made up of some 550 instructors and other logistical and medical staff from 23 European countries, including France, Germany, Spain, the Czech Republic, the United Kingdom…on Tuesday started the training of four Malian army battalions. With an initial mandate of 15 months, the mission is to cost about 12.3 million Euros.
The weakness and disorganization of the Malian army were revealed early 2012 when Tuareg separatists and well-armed Muslim jihadists gradually occupied large parts of Northern Mali.
Unprepared to wage a war or even to face up the jihadists’ invasion, the Malian army collapsed, while some of its members are said to have rallied the rebellion.
The Obama administration which contributed some $50 million to support the military operations in northern Mali by providing refueling services for French forces and airlift support for French and Chadian forces, had also voiced readiness to earmark an additional $32 million to train African troops.
The EU hopes that EUTM, which is also entrusted with re-establishing peace and the rule of law throughout the Malian territory, and fostering reconciliation between war-torn communities, will succeed in reforming and rebuilding the Malian army and endowing it with sufficient skills to enable it defend the country.