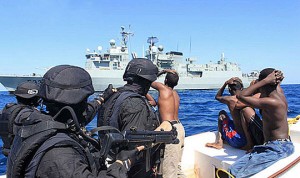 The European Union on Monday announced it would send to Africa a new EU Common Security and Defence Policy (CSDP) mission to support the fight against organized crime and terrorism in the Sahel Region and another team of security advisors to fight piracy in the Horn of Africa.
The first civilian mission, called EUCAP SAHEL Niger, will start in August. Its activities will initially focus on Niger, but could be extended to Mali and Mauritania at a later stage, the EU said in a statement.
The mission, part of the EU strategy for security and development in the Sahel, is being deployed at the Nigerien government’s request, the statement said.
“Increased terrorist activity and the consequences of the conflict in Libya have dramatically heightened insecurity in the Sahel. The new mission will contribute to strengthening local capacity in fighting terrorism and organized crime,” said EU High Representative Catherine Ashton in a statement.
The Niamey-based EUCAP SAHEL Niger, comprising around 50 international and 30 local staff, will train Nigerien security forces to improve their control of the territory and promote regional cooperation against terrorism.
The mission, due to last for two years, will have liaison officers in Bamako (Mali) and Nouakchott (Mauritania). A budget of 8.7 million euro has been allocated for the mission’s first year of operation.
The second mission, called EUCAP Nestor, will deploy around 175 people to support Djibouti, Kenya, the Seychelles and Somalia in their efforts against piracy, the EU said.
The mission, based in Djibouti, will have a two-year mandate and a 22.8-million-euro budget at its disposal. It will advise local authorities on maritime security and train coastal police. The mission will also train judges in Somalia.